Home SCIENCE Why does a NASA spacecraft collide with an asteroid?
SCIENCE

Why does a NASA spacecraft collide with an asteroid? 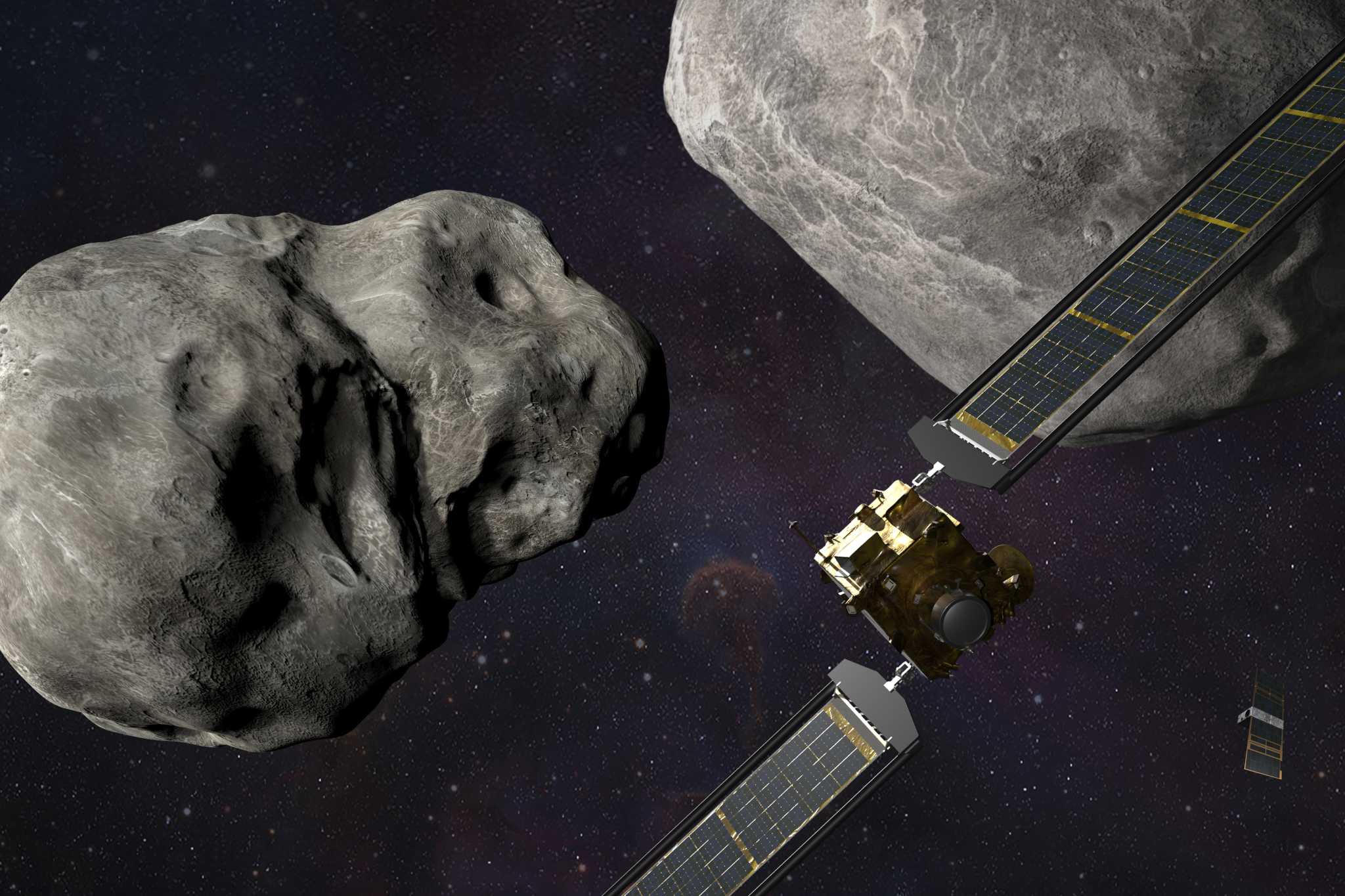 CAPE CANAVERAL, Florida. (AP) — In the first experiment of its kind to save the world, NASA is about to smash a small, harmless asteroid millions of miles away.

A spacecraft called Dart will zero in on the asteroid on Monday, intending to hit it head-on at 14,000 mph (22,500 kph). The impact should be enough to push the asteroid into a slightly tighter orbit around its companion space rock, showing that if a killer asteroid ever headed our way, we’d have a strong chance of deflecting it.

“This is stuff from science fiction books and really cheesy ‘StarTrek’ episodes from when I was a kid, and now it’s real,” NASA program scientist Tom Statler said Thursday.

Cameras and telescopes will watch the crash, but it will take days or even weeks to find out if the orbit actually changed.

The $325 million planetary defense test began with the launch of Dart last fall.

The target asteroid is Dimorphos, about 9.6 million kilometers (7 million miles) from Earth. It’s actually the puny companion to a 2,500-foot (780-meter) asteroid called Didymos, which is Greek for twin. Discovered in 1996, Didymos spins so fast that scientists think it shed material that eventually formed a small moon. Dimorphos, about 525 feet (160 meters) across, orbits its main body at a distance of less than a mile (1.2 kilometers).

“This is really about the deflection of the asteroid, not the disruption,” said Nancy Chabot, a planetary scientist and mission team leader at the Johns Hopkins University Applied Physics Laboratory, which is managing the effort. it’s not going to blow up the asteroid. It’s not going to put it into a lot of pieces.” Rather, the impact will carve out a crater tens of meters (yards) in size and hurl about 2 million pounds (1 million kilograms) of rocks and dirt into space.

NASA insists there is zero chance of an asteroid threatening Earth, now or in the future. That is why the couple was chosen.

The Johns Hopkins lab took a minimalist approach in developing Dart, short for Double Asteroid Redirection Test, since it is essentially a battering ram and faces certain destruction. It has only one instrument: a camera used to navigate, aim and record the final action. Dimorphos, thought to be essentially a pile of debris, will emerge as a point of light an hour before impact, looming ever larger in camera images beamed back to Earth. The managers are confident that the darts will not crash into the larger Didymos by mistake. The spacecraft’s navigation is designed to distinguish between the two asteroids and, in the last 50 minutes, target the smaller one.

The size of a small 570-kilogram (1,260-pound) vending machine, the spacecraft will crash into an estimated 5 billion kilograms (11 billion pounds) of asteroid. “Sometimes we describe it as driving a golf cart into a Great Pyramid,” Chabot said.

Unless Dart fails, NASA puts the odds of that happening at less than 10%, it will be the end of the road for Dart. If you howl past both space rocks, you’ll find them again in a couple of years for Take 2.

Little Dimorphos completes one lap around big Didymos every 11 hours and 55 minutes. Dart’s impact should take about 10 minutes off him. Although the bump itself should be immediately apparent, it could take a few weeks or more to verify the small moon’s modified orbit. Cameras on Dart and a tagalong mini satellite will capture the collision up close. Telescopes on all seven continents, along with the Hubble and Webb Space Telescopes and NASA’s asteroid-hunting Lucy spacecraft, can see a bright flash as Dart hits Dimorphos and sends streams of rock and dirt cascading into space. The observatories will track the pair of asteroids as they orbit the sun, to see if Dart altered Dimorphos’s orbit. In 2024, a European spacecraft called Hera will follow Dart’s journey to measure the results of the impact.

Although the predicted push should change the tiny moon’s position only slightly, that will add up to a major shift over time, according to Chabot. “So if I were going to do this for planetary defense, I would do it five, 10, 15, 20 years in advance for this technique to work,” he said. Even if Dart fails, the experiment will still provide valuable information. “This is why we do the tests. We want to do it now and not when there is a real need,” said Andrea Riley, NASA’s program executive.

Planet Earth is chasing asteroids. NASA has about a pound (450 grams) of debris collected from the asteroid Bennu headed for Earth. The stash should arrive next September. Japan was the first to recover asteroid samples, achieving the feat twice. China hopes to do the same with a mission launch in 2025. Meanwhile, NASA’s Lucy spacecraft is headed for asteroids near Jupiter, after launching last year. Another spacecraft, the Near-Earth Asteroid Scout, is loaded onto NASA’s new moon rocket awaiting liftoff; will use a solar sail to fly past a space rock less than 60 feet (18 meters) next year. In the coming years, NASA also plans to launch a census telescope to identify hard-to-find asteroids that could pose risks. An asteroid mission is grounded as an independent review board weighs its future. NASA’s Psyche spacecraft was supposed to launch this year to a metal-rich asteroid between Mars and Jupiter, but the team was unable to test the flight software in time.

THE TAKING OF HOLLYWOOD

Hollywood has produced dozens of killer space rock movies over the decades, including 1998’s “Armageddon,” which brought Bruce Willis to Cape Canaveral to film, and last year’s “Don’t Look Up” with Leonardo DiCaprio at in front of an all-star cast. . NASA planetary defense officer Lindley Johnson thinks he’s seen them all since 1979’s “Meteor,” his personal favorite “since Sean Connery played me.” While some sci-fi movies are more accurate than others, he noted, entertainment always wins. The good news is that the coast looks clear for the next century, with no known threats. Otherwise, “it would be like the movies, wouldn’t it?” NASA science mission chief Thomas Zurbuchen said. However, what is worrying are the unknown threats. Fewer than half of the 460-foot (140-meter) objects have been confirmed, with millions of smaller but still dangerous objects buzzing around. “These threats are real, and what makes this moment special is that we can do something about it,” Zurbuchen said. Not blowing up an asteroid like Willis’s character did, which would be a last-ditch last resort, or begging government leaders to take action like DiCaprio’s character did to no avail. If time allows, the best tactic might be to push the threatening asteroid out of our way, like Dart.

The Associated Press Health and Science Department receives support from the Howard Hughes Medical Institute’s Department of Science Education. The AP is solely responsible for all content.

Hundreds of hospitals along US coasts are in danger of flooding when hurricanes hit, new research warn. And as sea levels continue to...
Read more
SCIENCE

Despite plans to reinstate the mask mandate in Los Angeles County, the value of widespread mask use is no longer what it used to...
Read more
SCIENCE

SAN FRANCISCO-- With more than 100,000 people living on the streets of California, Gov. Gavin Newsom signed a first-of-its-kind law Wednesday that could...
Read more

In a new scientific statement, the American Heart Association (AHA) highlights the unique drivers of burnout in academic...
Read more