The WNBA improves charter flights for the finals 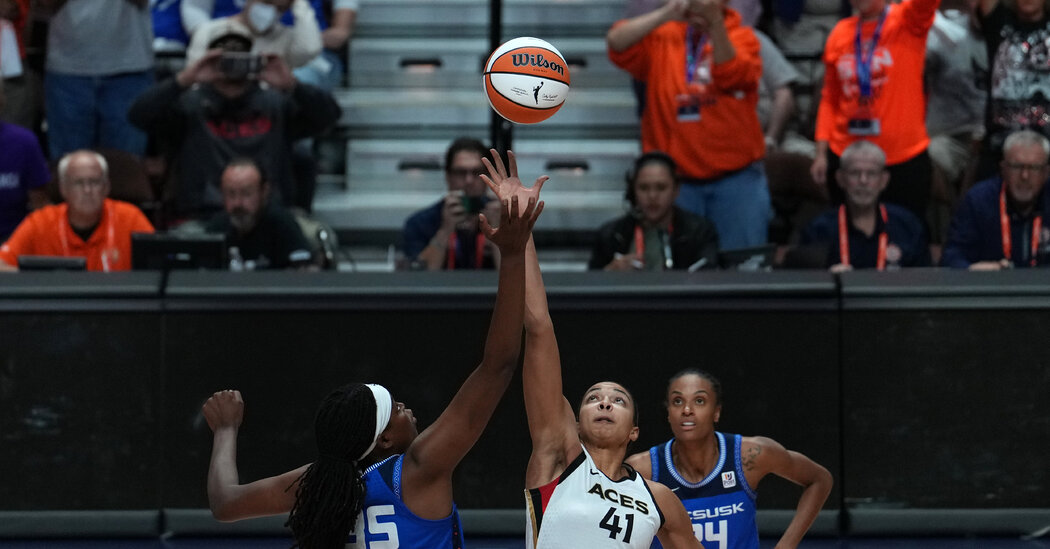 UNCASVILLE, Conn. — There were “oohs and aahs” of excitement as the Connecticut Sun players boarded their charter plane en route to Las Vegas for Game 1 of the WNBA Finals, shooting guard Nia Clouden said.

Waiting for them were pillows and blankets, seats that fully reclined, and a generous menu of complimentary food. Clouden typically never eats the roasted salted almonds, cookies, chips and other snacks offered on the team’s commercial flights. But she that night she ordered a pepperoni pizza.

Sun center Jonquel Jones pointed to the long legs that are part of her 6-foot-6, 215-pound frame to show how legroom on the charter flight made a difference to her. She usually tries to find the exit row seat on flights, but the space is never enough. Jones said he, too, was happy to avoid “all the unnecessary stuff that happens at airports.”

“Sometimes after a game you don’t really feel like talking, and you go to the airport and people want to talk about the game,” Jones said with a laugh. “Or they want to ask you how tall you are, constantly, all the time. How’s the weather up there? And it’s like, dude, I’m just trying to get to the next destination.”

She added: “As much as we love our fans, we appreciate them, sometimes it really gets a little tiring and makes the season a little bit harder.”

This season, for the first time in history, the league agreed to provide charter travel during the WNBA Finals. Commissioner Cathy Engelbert has said the league doesn’t have enough revenue to cover all teams’ travel during the regular season and playoffs, which she estimated would cost more than $20 million. Teams fly commercially throughout the season and playoffs, with rare exceptions for extreme travel hardships.

Athletes from major professional sports leagues like the NFL, NBA and MLB, and even many Division I male and female athletes, have become accustomed to charter travel. But those men’s leagues have been around much longer than the WNBA and have billions of dollars in revenue, while the women’s league regularly operates at a loss.

The WNBA has not committed to offering charter flights for next year’s finals or expanding them into the regular season or any other part of the playoffs. Engelbert said the league was able to provide charter flights for the finals because of its efforts to increase revenue.

“As we focus on growing this league by adding more corporate partners, increasing media exposure and disrupting outdated valuations of women’s sports media rights,” Engelbert said in a statement, “we look forward to continuing to offer these opportunities when possible.

More about the WNBA

The WNBA’s collective bargaining agreement with the players’ union prohibits teams from contracting flights without league approval. The Liberty were fined $500,000 for secretly flying to multiple games by charter plane last season.

So players fly commercially, dealing with delays, Covid risks and the many flight challenges customers also face every day. If you’re wondering why professional athletes should have different travel standards, many WNBA players said it all started with the break.

Getting a good night’s sleep is critical to playing in a 36-game regular season, with half of those games away from home, when a player’s future salary and league berth depend on his performance each night, officials said. players. Rest can be especially challenging on a commercial flight for the tall humans who occupy women’s basketball teams. But more importantly, flight delays and cancellations can cause teams to lose games.

The Aces lost a game in 2018 after dealing with more than 25 hours of delays and layovers on their way to Washington, DC, to play the Mystics. They arrived just four hours before their game. The Aces mentioned health problems. as the reason for not playing and they were the first team in league history to lose a game. Las Vegas missed the playoffs, finishing one game behind the Dallas Wings.

“I definitely think having charters is a trickle-down effect so people can take better care of their bodies and rest,” Aces guard Sydney Colson said. “And then you have better games to watch because people are rested and injury-free.”

For those players who played college basketball for major programs in the United States, the special finals trip is a welcome return to the norm, as many of their schools provided charter flights for all games.

“There aren’t many times that I can remember where we flew commercial,” said Aces forward Theresa Plaisance, who played at Louisiana State University. “And when you get to the WNBA, and you go to your middle seat at Southwest, sometimes it’s really hard to swallow that pill and think, ‘Oh, this is my progression. I went from college to get to a professional league, and I have to go back.’”

For Peter Feeney, the Sun’s manager of basketball operations, who has handled all flight logistics for the past four years, the simplicity of the trip blew him away, he said. Feeney usually arrives at airports an hour before the team to make sure they can get through security safely. But on both of his charter flights, they got to the plane less than an hour before takeoff, and the flight crew took care of just about everything.

The moment made Feeney realize that if the league switched to all-season charters, he would be less useful in his role. But he also serves as video coordinator, so he welcomes the idea. “That’s a good problem, right?” he said with a laugh.

Aces forward A’ja Wilson, who has been outspoken about the WNBA’s travel issuesHe said the players had talked about what life would be like if charter flights were normal after they comfortably made the cross-country trip to Connecticut from Las Vegas for Game 3 on Thursday.

“We need it. There’s nothing else,” Wilson said. “We need to be able to fly like that after every match. I can only imagine how my body would feel if we did. So I think it’s a big deal for us to do it. We have to keep pushing it.”

Tech signatures could be how we first found alien life, astronomers say

Penn State astronomers Macy Huston and Jason Wright work on the search for extraterrestrial intelligence (SETI). The post Technosignatures could be how we first found...
Read more