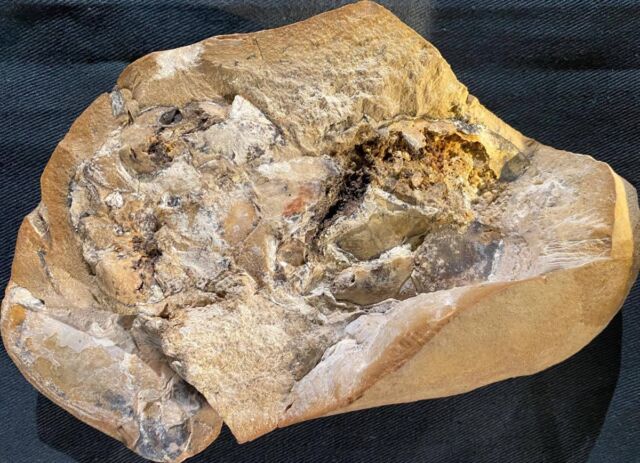 A team of Australian scientists has discovered the the oldest heart in the world, part of the fossilized remains of an armored fish that died about 380 million years ago. The fish also had a fossilized stomach, liver, and intestine. All organs were arranged as similar organs in modern shark anatomy, according to a recent article published in the journal Science.

As we reported earlier, most fossils are bones, shells, teeth, and other forms of “hard” tissue, but fossils are occasionally discovered that preserve soft tissue such as skin, muscle, organs, or even the occasional eyeball. This can tell scientists much about aspects of the biology, ecology, and evolution of organisms so ancient that skeletons alone cannot convey.

For example, earlier this year, researchers created a highly detailed 3D model of a 365-million-year-old ammonite fossil from the Jurassic combining advanced imaging techniques, revealing inner muscles that had never been observed before. Among other findings, the researchers observed pairs of muscles extending from the ammonite’s body, which they assume the animal used to retract further into its shell to avoid predators.

And last month, British researchers described his experiments Monitor dead sea bass carcasses as they rotted over the course of 70 days to learn how (and why) the soft tissues of internal organs may be selectively preserved in the fossil record. One of the best ways that soft tissue can turn into rock is when it is replaced by a mineral called calcium phosphate (sometimes called apatite). Specifically, the muscles, stomachs, and intestines tend to “phosphate” much more frequently than other organs such as the kidneys and gonads. The authors concluded that the phosphorus content of a specific organ tissue contributes to this unusual selection bias by which soft tissues are preserved in the fossil record.

The fossilized specimens examined in this latest article were collected from the Gogo Formation in Western Australia, which was once a reef and is rich in exceptionally well-preserved Devonian fossils, such as the class of armored prehistoric fish known as placoderms. That preservation includes soft tissue, including nerves. In 2005, paleontologists even unearthed a new species of placoderm, called Materpiscis (“mother fish”), with an embryo still attached by an umbilical cord, evidence that at least some species of armored fish gave birth to well-developed live young.

According to the authors of this latest article, placoderms were among the first jawed vertebrates, whose evolution involved significant changes in skeletal structure and soft anatomy. Because soft tissue preservation is so rare in the fossil record, samples collected from the Gogo Formation (and now housed in the public collections of the Museum of Western Australia and Museum of Victoria) could hold clues to how this transition occurred. , specifically, how the head and neck region changed to accommodate the jaws.

“What’s really unique about Gogo fish is that their soft tissues are preserved in three dimensions,” said co-author Per Ahlberg from Uppsala University. “Most cases of soft tissue preservation are in flattened fossils, where the soft anatomy is little more than a speck in the rock. We are also very fortunate because modern scanning techniques allow us to study these fragile soft tissues without destroying them.” A couple of decades ago, the project would have been impossible.”

Paleontologists collected the samples by splitting limestone concretions in the field and then gluing the broken pieces together for transport. The researchers were able to scan the intact samples using beams of neutrons and synchrotron radiation. They then constructed 3D images of the soft tissues preserved within them based on the different densities of minerals deposited by bacteria and the surrounding rock matrix.

The result: the first 3D model of a complex, flat, S-shaped heart with two distinct chambers. The team also took images of a thick-walled stomach with intact intestines and a liver, separated from the heart; they also noted the absence of lungs. The fossilized liver was quite large and probably helped keep the fish afloat, according to the authors. It is the first time that scientists have been able to see the arrangement of organs inside an early jawed fish.

“As a paleontologist who has studied fossils for more than 20 years, I was very surprised to find a beautifully preserved 3D heart in a 380-million-year-old ancestor.” said co-author Kate Trinajstic, a vertebrate paleontologist at Curtin University. “Evolution is often thought of as a series of small steps, but these ancient fossils suggest that there was a larger jump between jawless and jawed vertebrates. These fish literally have their hearts in their mouths and under their gills, just like sharks today.”

Photos courtesy of retailers GIVING A A sexy gift is always a good move to heat up the romance in your relationship. After all,...
Read more

When a 24-year-old febrile patient with seizures, chest pain and bloody eyes sought treatment at the Mubende Regional Referral Hospital in central Uganda on...
Read more

Although rare, most deaths (about two-thirds) from pregnancy they are preventable. Still, about 700 women die in the US...
Read more