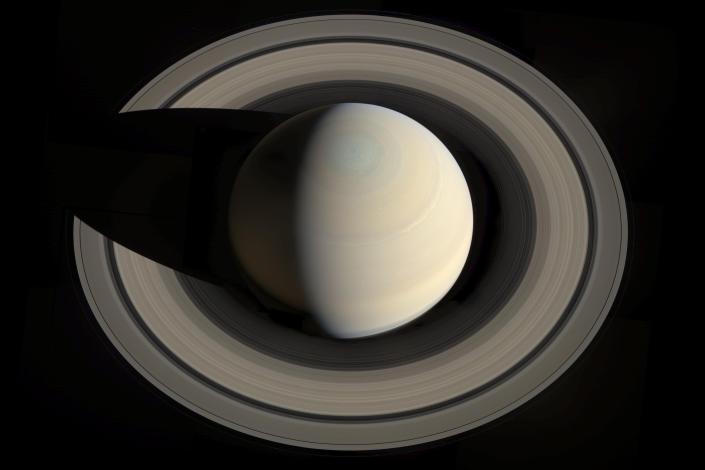 Scientists say a single moon could clear up two cosmic mysteries about Saturn.

When Galileo Galilei first looked at Saturn in 1610, the astronomer noted that the planet had what appeared to be “ears“They proved to be The iconic rings of Saturn. How and when these rings formed has baffled astronomers ever since.

Another mystery of Saturn is its dramatic 27-degree tilt to one side. According to the researchers, that tilt is too large to have formed when the gas giant did or to have been the result of collisions that brought the planet down. By comparison, the Earth’s tilt ranges from 22.1 and 24.5 degrees.

In a study published Thursday in the magazineScience, the researchers ran a series of simulations that suggest Saturn’s rings and their unusual tilt could have formed 160 million years ago, when one of its icy moons destabilized and fell into a chaotic orbit around the planet. Eventually, the moon, which the researchers named Chrysalis, got too close to the gas giant and tore itself apart.

The models are based on data from the final stage of NASA Cassini Mission, which spent 13 years orbiting Saturn and its moons before plunging into the planet’s atmosphere in 2017.

Today, the giant’s planetary system is home to 83 moons. The researchers believe that Chrysalis was probably about the size of Iapetus, Saturn’s third largest moon.

The researchers said about 99% of Chrysalis’s debris plunged into Saturn’s atmosphere, while the remaining 1% remained in orbit, leaving behind a debris-filled ring that formed the planet’s iconic large rings.

“Like a butterfly’s chrysalis, this satellite was dormant for a long time and then suddenly activated, and the rings emerged,” Jack Wisdom, lead author and professor of planetary sciences at MIT, said in a statement. statements.

Planetary scientists have long suspected that Saturn’s tilt may be due to gravitational interactions with Neptune. To gain insight into the planet’s tilt, the researchers used simulations to calculate Saturn’s moment of inertia, which relates to the force needed to tip the planet on its side. They found that while Saturn may have been gravitationally in sync with Neptune, something changed about 160 million years ago, removing Saturn from Neptune’s influence.

“Then we looked at ways to get Saturn out of Neptune’s resonance,” Wisdom said. Resonance occurs when two celestial bodies keep realigning after a certain number of orbits. They theorized that an ancient moon, Chrysalis, might have kept Saturn under Neptune’s influence until it disintegrated, allowing Saturn to fall out of resonance with Neptune.

Wisdom stressed that more data will be needed to see if the theory holds up. “It’s a pretty good story, but like any other result, it will have to be examined by others,” Wisdom said. He added that the small moon appears to have acted like a butterfly in the chrysalis phase, with its rings emerging once it was ripped apart by Saturn’s gravity.

‘Virtue signaling’: DeSantis mocks Democrats who complain about having to deal with illegal immigrants

How to Add Fonts to Windows (and Where to Find Them)

Whether you're choosing the right font for a professional document or a personal blog, ensuring readability, printability, and impact is very important....
Read more