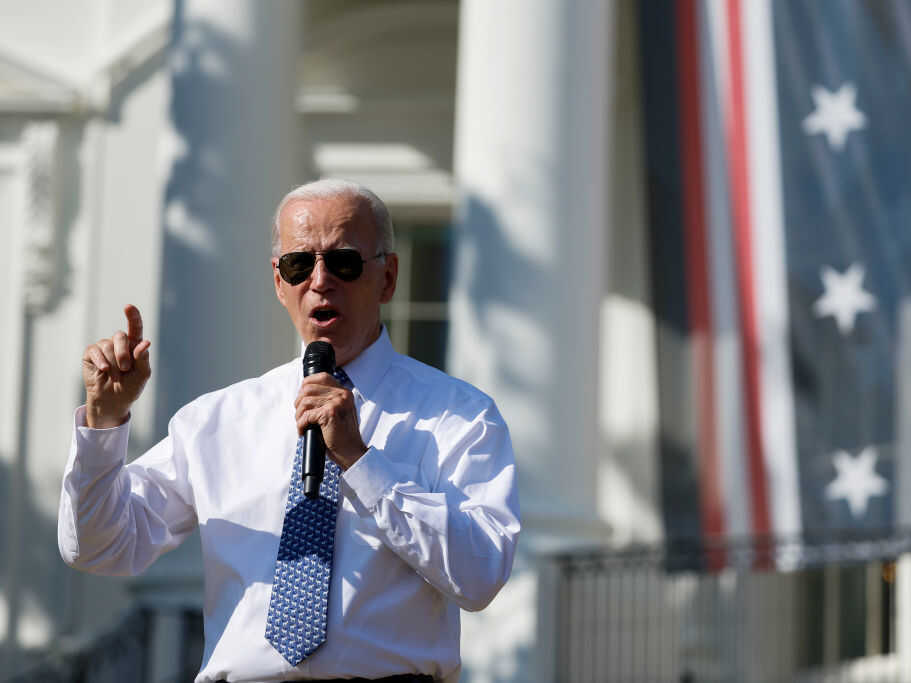 President Biden speaks during an event Tuesday celebrating the passage of the Inflation Reduction Act on the South Lawn of the White House. The new law gives Medicare the power to negotiate drug prices.

President Biden speaks during an event Tuesday celebrating the passage of the Inflation Reduction Act on the South Lawn of the White House. The new law gives Medicare the power to negotiate drug prices.

On Tuesday, the White House celebrated the passage of the Inflation Reduction Act, a sweeping climate, fiscal and health care package approved in August. Among other measures, it gives Medicare historic new powers to control prescription drug prices.

Democratic leaders like US Sen. Chuck Schumer, DN.Y., celebrated what they see as one of the law’s landmark achievements. “For years, naysayers said we could never take on Big Pharma and drive down prescription drug costs, but we did and we won,” Schumer said.

But for the people facing implementation of this law, the work is just beginning. Now federal government employees and drug companies are starting a new round in the fight over how much Medicare’s massive program pays for prescription drugs.

This round is shaping up to be a bureaucratic fight over the fine print of the new law, its loopholes and its legality. This is what is at stake and what prevents Medicare from benefiting from the new measures.

Two of the biggest battlegrounds will be a pair of new powers lawmakers have given to Medicare, the federal insurance program that covers 64 million seniors and people with disabilities. Medicare’s approximately $180 billion annual drug budget accounts for more than a third of the nation’s total drug spending.

One of the new powers allows the federal government to negotiate deep discounts directly with drug manufacturers for some of the drugs that cost Medicare the most. This provision is unprecedented, and the pharmaceutical industry fought for decades.

To be eligible for bargaining, drugs must be among the top 100 products costing Medicare the most, have been on the market for at least several years, lack generic competition and be unaffected by several other exemptions in the law.

Despite those caveats, Medicare can still target some of the industry’s biggest moneymakers, like Eliquis and Xarelto, a pair of blood-thinning drugs that Medicare spent $10 billion on in 2020, and Januvia, a drug for the diabetes that racked up nearly $4 billion in Medicare sales that same year.

Medicare will announce its first 10 targets next September, and negotiated prices for those drugs take effect in 2026. The law allows Medicare to target additional drugs each year thereafter, adding up to 60 by the end of this decade.

The other new power lawmakers gave Medicare is known as the inflation rebate. It has precedent. Medicaid, which covers 82 million low-income Americans, has used its inflation discounting power for 30 years. Allows Medicaid to recoup any price increase that exceeds the rate of inflation and has significantly reduced Medicaid expenses.

This provision, which applies to most drugs, now allows Medicare to do the same. It takes full effect in 2023, and Medicare plans to collect reimbursement payments for some drugs as soon as April.

Figures released last week by the Congressional Budget Office estimate that, taken together, this pair of provisions save Medicare about $170 billion over the next decade. But those savings are far from guaranteed.

Although the Inflation Reduction Act is now law, many of its crucial details still need to be completed. That process, known as rulemaking and guidance, is where experts hope the pharmaceutical industry will change its lobbying effort.

Many seemingly technical details could have important implications for the impact of this law. For example, the text of the Act does not clearly describe how a negotiated price will be calculated if a negotiation between a drug manufacturer and Medicare ends in an impasse.

Mark Newsom, a policy consultant who worked at the Centers for Medicare & Medicaid Services for several years, including in 2004 when Medicare underwent major reforms, expects the pharmaceutical industry to exert strong political and legal pressure in this rulemaking process.

Numerous experts say they expect to see lawsuits challenging provisions of the law. One legal goal could be a massive tax penalty for companies that refuse to settle with Medicare.

Exploiting vulnerabilities in the law

At the same time, the pharmaceutical industry is also laying out plans for a world in which the new powers of Medicare survive. “They are absolutely preparing for implementation,” said Alice Valder Curran, who advises drug companies on pricing strategy at the law firm. hogan lovells.

There is plenty of evidence from Medicaid’s 30 years of implementing inflation reimbursements that shows how drugmakers work around the system.

Occasionally, companies brazenly break the rules, as evidenced in a recent $233 million deal between the Justice Department and Mallinckrodt Pharmaceuticals. Far more often, however, Dickson said, companies take advantage of the rules, exploiting vague definitions, faulty formulas other other gaps in the discount law.

One area ripe for play is the formula known as the average manufacturer’s price that Medicaid uses to determine whether companies owe money for raising prices faster than inflation. The law gives companies wide discretion in how they calculate that average, and companies have used that discretion to include or exclude certain sales to avoid triggering rebate payments. One loophole in that formula alone, which Congress closed in 2019, had cost Medicaid at least $595 million per year in lost reimbursements, according to a report by the U.S. Department of Health and Human Services Office of Inspector General. .

The Reducing Inflation Act essentially duplicates the language of the Medicaid inflation reimbursement law, making Medicare now vulnerable to the same loopholes. And drugmakers have much more incentive to exploit them, Dickson said. companies do three times the income from Medicare than they earn from Medicaid.

“It’s an ongoing effort to keep working and find where those vulnerabilities are,” said Amber Jessup, chief health care economist at the Office of the Inspector General of the Department of Health and Human Services, which monitors federal health programs for fraud, waste, and abuse. Jessup added that it is too early for him to know if similar vulnerabilities could be found within the bargaining provision of this new law.

He said that his team of auditors, analysts, appraisers and lawyers feel the weight of this new challenge. “There are a lot of health care dollars at stake.”

Preparing for the unprecedented

Whatever conflicts lie ahead, the Reduce Inflation Act will usher in a sea change in the way Medicare pays for prescription drugs. “It transcends any of the other pricing reforms I’ve seen, because it’s so broad,” said industry adviser Alice Valder Curran.

That expansion has made the law’s long-term implications difficult to determine, especially for large pharmaceutical companies with hundreds of products on the market, each priced and paid for in different ways. “We’re really still in the discovery phase,” Curran said.

Other industry experts expect companies to consider a variety of responses to the law to make up for lost bottom lines, including charging private insurers more or raising introductory prices for future drugs, an area not covered by the law.

About the only thing certain so early in the implementation of the new law is that drugmakers and the government officials who regulate them are hurtling toward a new frontier. The race to map it, navigate it, and thrive on it is just beginning.

This story was produced by offsetsa podcast that explores our confusing, expensive, and often counterintuitive health care system.

Hurricane Ian: They stayed for the storm – what happens now?

Floridians face difficult decisions about whether to stay or go after Hurricane Ian.
Read more