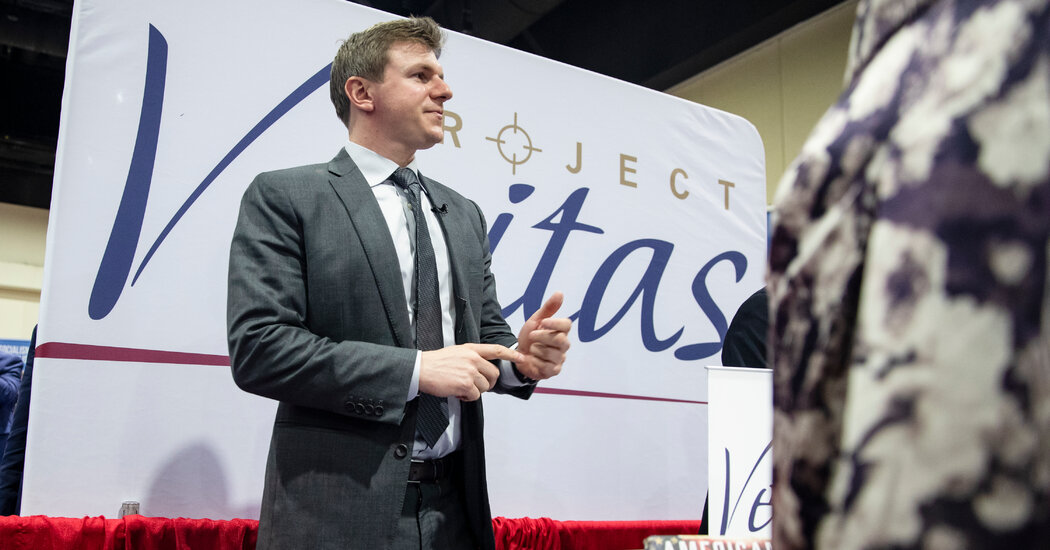 WASHINGTON – A jury in a federal civil case on Thursday found that Project Veritas, a conservative group known for its deceptive tactics, had violated wiretapping laws and fraudulently posed as part of a prolonged sting operation against Democratic political advisers.

The jury awarded the consulting firm Democracy Partners $120,000. The decision amounted to a harsh rebuke of the practices Project Veritas and its founder, James O’Keefe, have relied on. During the trial, Project Veritas’ lawyers portrayed the operation as news gathering and its employees as journalists following events.

“Hopefully, today’s decision will help deter Mr. O’Keefe and others from conducting this type of political espionage operation and posting selectively edited misleading videos in the future,” Robert Creamer, co-founder of Democracy Partners, said in a statement. statement after the jury reached a verdict.

Project Veritas said it would appeal the decision.

In 2016, according to testimony and documents presented at trial, Project Veritas carried out a plan to infiltrate Democracy Partners, which worked for Hillary Clinton’s presidential campaign through the Democratic National Committee.

As part of the ruse, a Project Veritas agent posing as a wealthy donor named Charles Roth mentioned to Mr. Creamer that he wanted to make a $20,000 donation to a progressive group that was also a client of Mr. Creamer’s.

Later, the man posing as Roth told Creamer that his niece was interested in continuing her work in Democratic circles. After the money was wired from an offshore account in Belize to the group, Creamer talked to the woman playing Roth’s niece and offered her an unpaid internship at Democracy Partners.

The niece used a fake name and email account along with a fake resume. In his book, “American Pravda,” Mr. O’Keefe wrote that “the donation certainly greased the wheels.”

The agent, whose real name is Allison Maass, secretly recorded conversations and took documents while working at Democracy Partners. She then provided the information to her superiors at Project Veritas, who edited the videos and made them public.

The videos suggested that Creamer and another man, Scott Foval, were developing a plan to provoke violence from supporters of Donald J. Trump at his rallies. Mr. Creamer’s lawsuit said the “video was heavily edited and contained comments from O’Keefe that drew false conclusions.” According to court documents filed in the case, the man playing Mr. Roth had proposed an “illegal voter registration scheme, and Creamer flatly rejected it as illegal.”

The lawsuit alleged that Mr. Creamer had lost more than $500,000 in contracts due to deception behind the operation of Project Veritas.

How Times reporters cover politics. We trust our journalists to be independent observers. So while Times staff members can vote, they are not allowed to endorse or campaign for political candidates or causes. This includes participating in marches or rallies in support of a movement or giving money or raising money for any political candidate or electoral cause.

Joseph E. Sandler, a lawyer for Democracy Partners, said during opening arguments last week that O’Keefe was a “strong supporter” of Trump and had tried to tip the scales in his favor during the 2016 election. The operation, he said Sandler, “was carried out for the primary purpose of embarrassing Hillary Clinton and electing Donald Trump.”

He described the elaborate operation as a “meticulous web of lies conjured up by Project Veritas.”

According to an email from Project Veritas and evidence, Mr. O’Keefe offered his employees cash bonuses for incriminating statements and $2,500 bonuses if Mr. Trump mentioned his videos at presidential debates late in the year. October. The email is marked as “highly confidential”.

At trial, Sandler said that Project Veritas was trying to “find out what they themselves made up.”

Paul A. Calli, an attorney for Project Veritas, argued that the videos were newsworthy, noting that the media had carried stories about the undercover operation. He said the lawsuit was just “bitter grapes.”

He said there was no evidence that it was a political espionage operation and that the lawsuit was an attack on journalism.

“The sole purpose of the operation was journalism,” Calli said.

Before the trial, a federal judge ruled that Democracy Partners could refer to Project Veritas’ conduct as a “political espionage operation.”

Project Veritas faces legal fights on several fronts. In August, some of his former employees south of the group, representing a “highly sexualized” work culture in which daytime drug and alcohol use were common and employees overtime worked without pay.

That same month, two Floridians pleaded guilty in federal court in Manhattan to stealing a newspaper belonging to the president’s daughter, Ashley Biden, and selling it to Project Veritas. According to court documents, prosecutors claimed that a Project Veritas employee had ordered the defendants to steal additional items to authenticate the diary and paid them additional money after receiving them.

No charges have been filed against Project Veritas or any of its agents in the Ashley Biden case, and the group never published the diary. But in a sign that the investigation into the group will continue, authorities said one of the Florida residents had agreed to cooperate. As part of that investigation, FBI agents conducted court-authorized searches last year at three homes of Project Veritas employees, including Mr. O’Keefe.

Project Veritas was also ordered in August to pay Stanford University about $150,000 in legal fees after a federal judge dismissed the defamation lawsuit the group filed in 2021.

Project Veritas also has an ongoing libel lawsuit against The New York Times.

If you thought Neanderthals survived on a diet of foraged berries and raw animal meat, think again. The charred remains of what appears...
Read more

Last month, Iran's Generation Z was turned on when twenty-two-year-old Mahsa Amini died after being detained by morality police for "inappropriate dress." She...
Read more

The best new shows to stream on Netflix, Hulu, HBO and more

Now that Halloween is over and the holiday season is in full swing, you may be looking for something lighter to try this week...
Read more