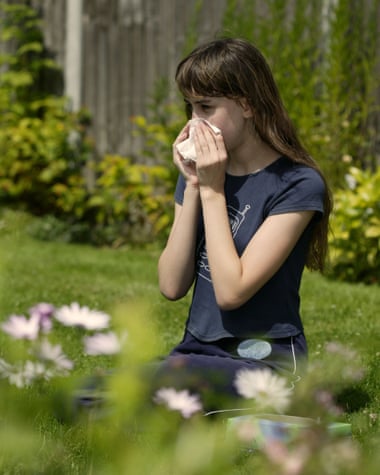 Ah, spring: lambs are frolicking in the fields, the winter chill is beginning to fade, and about one in five Australians might consider gouging out their (itchy, watery) eyes to escape the cursed symptoms of hay fever.

Hay fever, or allergic rhinitis, can strike throughout the year, any time allergens such as dust mites, molds, or certain pollens are present.

But for those who suffer from seasonal allergic rhinitis, there is concern that continued rain along the country’s eastern seaboard will lead to higher-than-average pollen production and one particularly sneezing spring.

Melbourne Pollen Count coordinator Associate Professor Ed Newbigin says that if these conditions continue over the next few months, Sydney will likely see a heavier grass pollen season than last year, while Canberra and Melbourne could be more or less the same as in 2021.

“That said, 2021 was one of Canberra’s biggest grass pollen seasons, so to say it looks similar won’t be too much comfort to Canberrans with hay fever and asthma,” he says.

“Last year Melbourne had an average grass pollen season and that’s how things are working out again this season.”

Because subtropical grasses tend to flower later than temperate grasses (in late summer and early fall), Newbigin says it’s too early to comment on Brisbane’s season, which won’t peak until next year. .

“The current Indian Ocean dipole and material’s listThe forecast of a 70% chance of another La Niña season suggests that most of the eastern half of Australia is likely to see above-average rainfall from September to November,” says Newbigin.

“While a wet spring should mean lots of grass growth and lots of grass pollen, the forecasts are not promising and it is very likely that we will see large differences in grass pollen levels across different regions of eastern Australia.”

He also cautions that the problem often goes undiagnosed in children.

The respiratory researcher and pharmacist led a recent Study of over 1,500 Australian parents which found that children’s sleep, schoolwork and daily life suffered when allergic rhinitis was not well controlled.

“In some ways it’s perhaps not surprising; children often have a runny nose, colds, etc. ”, says Bosnic-Anticevich. “It can be difficult to tell if the symptoms are a cold or allergic rhinitis.”

But the optimal treatment could be “life changing.”

“I really cannot stress how important it is for parents to seek advice, and possibly a diagnosis, if their child is experiencing recurring cold-like symptoms.”

Bosnic-Anticevich recommends speaking with a pharmacist or GP before beginning any treatment, noting that many adults select their own over-the-counter medications, with poor results.

“It is mainly people with moderate to severe allergic rhinitis, or people who report that it affects their daily lives in some way, who seek medical attention. When it comes to the choice of medication, 70% select their own medication without help from the pharmacy.

Most choose antihistamine tablets as their first-line treatment, regardless of the severity of their symptoms, says Bosnic-Anticevich.

“In fact, only a very small proportion of people will derive optimal benefit from oral antihistamine tablets, and this tends to set up a cycle of medication trial and error, with under-treated allergic rhinitis.

“In general, we would expect most people who report allergic rhinitis to impact their daily lives to be treated with intranasal sprays, either antihistamines or anti-inflammatories, or a combination of the two.”

Dr. Kerry Hancock, an Adelaide GP with a special interest in respiratory medicine, urges those already using nasal sprays to heed the instructions.

“It is very, very important that people who take nasal sprays take them correctly to get the most benefit from them and minimize side effects. Many people stop taking nasal steroids due to nosebleeds, but often this is because they are not using the sprays correctly.”

People with severe allergies may also be referred to a specialist for allergy immunotherapy.

“Those with more bothersome and/or persistent symptoms would benefit from allergy testing that can be relatively easily arranged by their GP, either by blood tests or by referring to skin prick tests,” says Hancock.

have a game plan

Doctors can also make action plans in case symptoms escalate. Hancock noted that people with seasonal allergic rhinitis, asthma, or both are at higher risk for the rare but life-threatening disease, asthma storm.

The director of the Canberra Pollen Monitoring Program, Prof. Simon Haberle, says that while allergenic pollen can have severe health impacts, there is an increasing amount of information available to help people suffering from allergic rhinitis. and asthma to manage the risks.

These include pollen forecast other air rater. The Victorian Government also provides thunderstorm asthma resources in multiple languages and a risk forecast between October and December.

“By following your GP’s advice and monitoring your daily pollen counts, your health outcomes can be greatly improved,” says Haberle.

Whose fault is it?

Haberle says that most of the plants that cause allergic rhinitis were introduced to Australia through colonization, for pastures and urban landscapes.

“The main culprit in the temperate regions of southern Australia is ryegrass (perennial lolium) that blooms between the months of October and December, reaching its peak during November.” Living far from the fields is no guarantee of relief either. Haberle says that “allergenic grasses can be produced in abundance and transported many tens of kilometers.”

The full effects of “non-grass” pollen on allergies are not fully understoodBut Haberle says trees with allergenic pollen include pine cypress, ash, birch, plane, aspen, elm and oak, along with native casuarina species.

“Our monitoring records are short, but there are some indications that grass pollen seasons are starting earlier and a lot more pollen is being produced,” says Haberle. “Both of these trends are in line with observations of changing pollen seasons in the Northern Hemisphere and have been linked to the impacts of climate change.”

West Virginia coach Bob Huggins isn't convinced Gonzaga, a powerhouse in recent years, will maintain his success if he moves to the Big 12,...
Read more

Internet Explorer 11 is not supported. For the best experience, please visit our site in another browser.playing nowSix people die when plane crashes...
Read more