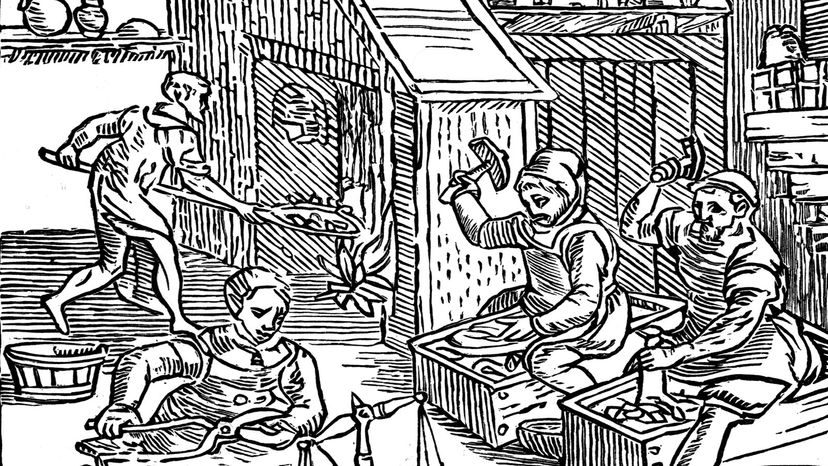 At this point, you probably have a good idea of ​​Newton’s obsessive nature. It should therefore come as no surprise to learn that, when appointed to the largely ceremonial role of Warden at the Royal Mint in 1696, the famous inventor took to the streets of London, in disguise, to eradicate counterfeiters.

And since forgery was then a capital offense in Britain, the wrongdoers he brought to justice usually ended up on the execution block.

You see, in the late 1600s, England’s financial system was in crisis. The country’s currency consisted entirely of silver coins, and that silver was often worth more than the value stamped on it. So what did the people do? Why, they melted down the coins or “trimmed” the silver from the edges to sell to France.

By Newton’s time, clipping had done a number on the nation’s currency. The average bag of English coins was just a hodgepodge of unrecognizable, damaged bits of silver. As such, the counterfeiters had a field day. Since English coins varied so much in size and quality, it was easy to pass off even the most sloppy imitations as legal tender. Riots broke out as faith in English currency plummeted.

So, in 1696, the British government called newton. In addition to practical crime-fighting, he recalled all English coins and had them melted down and remade into a higher-quality, more difficult-to-counterfeit design. It was a bold move, considering the entire country had to get by without currency for an entire year. Working up to 18 hours a day, Newton reorganized Royal Mints into high-quality, high-efficiency factories that produced currency that was highly resistant to counterfeiters.

You know those ridges on the edge of an American coin? Those are milled edges, a feature introduced by Newton on English coins to prevent clipping.

Tokyo began issuing partnership certificates recognizing same-sex couples on Tuesday, a step toward equality in a country where same-sex marriage is not yet legally...
Read more

The close and risky battle for the Michigan legislature

X-Legend Entertainment has announced that the pre-registration period for Honor of Heirs, the studio's upcoming 3D MMORPG for iOS and Android, is now open....
Read more