Ian reaches major hurricane category, will be a historic storm for Florida 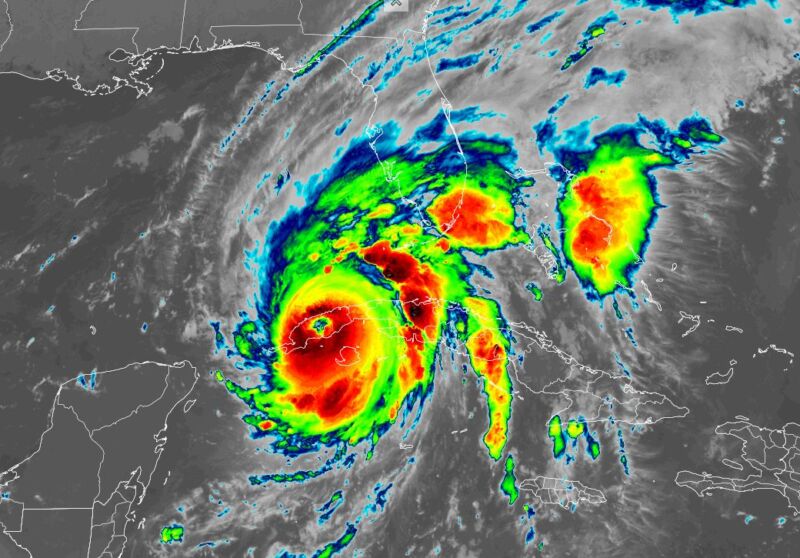 Hurricane Ian continued to intensify Monday night, reaching sustained winds of 125 mph as its center passed the western edge of Cuba. From there, the storm will move into the southeastern Gulf of Mexico, where very warm water and low wind shear will allow for further intensification.

The hurricane has been moving around the western edge of a high-pressure system, but as Ian approaches the western coast of Florida on Wednesday, it will begin to run into a low-pressure depression blanketing the southeastern United States. The net effect of this will see Ian slow down, perhaps only moving a few miles per hour for a couple of days.

All of this is a recipe for disaster across much of the Florida panhandle, but it’s hard to say precisely where and what effects. Although landfall is expected in less than two days, there remains considerable uncertainty about where Ian will make landfall along the western coast of Florida and where it will go. This is due, in part, to the breakdown of their steering currents.

The area most at risk is the densely populated region of Tampa, which is built around a large bay that would serve as a funnel for storm surge. Some risk analysis have found that more than half a million homes in Tampa are vulnerable to storm surges, pushed by a hurricane’s circulation over the ocean, at a replacement cost of $126 billion. Approximately half of the population of the metropolitan area lives in houses built at heights of 10 feet or less.

In the lead up to Ian’s landfall, the Tampa region has received much of the attention due to its large population and the fact that it hasn’t been hit by a major hurricane in over a century. The region has escaped direct hits from a powerful hurricane ever since. a nameless hurricane struck the area in late October 1921. The region’s population has increased more than 10-fold since then, to about 3 million people.

If Ian made landfall in Tampa, or within 50 to 100 miles to the north, it would really bring a devastating storm surge to the area, along with significant wind damage. These effects, combined with a slow-moving hurricane, would be almost a worst-case scenario storm for Tampa or any populated area.

However, due to the uncertainty of Ian’s track over the next two days, it remains possible that Ian could make landfall south of Tampa. A hurricane’s storm surge is always worst to the right of its center, where its counterclockwise circulation pushes water toward the shoreline. A landfall even 20 or 30 miles south of Tampa would be bad, but it would save Tampa Bay from significant flood damage.

Ian is expected to make landfall along the west or southwestern coast of Florida and then track north across much of the peninsula. Although its winds will taper off a bit as the center reaches the coast, it will still pack a punch. Inland communities like Orlando and The Villages, according to the National Hurricane Center, have at least a 1 in 5 chance to experience hurricane force winds.

In addition to the winds, for inland areas of Florida, there is also a serious threat of intense and prolonged rain. Ian’s slow motion will exacerbate these showers as some of its large structure remains offshore, drawing moisture into thunderstorms over land.

Although it is not yet possible to be confident as to exactly where the heaviest rains will occur, it seems likely that a 15- to 25-inch swath of rain will cover a significant area of ​​the Florida panhandle as Ian moves inland and drenches the state. This will compound the misery of those whose roofs are damaged by the wind or are left without power.

Ian’s latest tracking forecast also brings the center of the storm closer, if not directly over Kenned Space Center and the Cape Canaveral Space Force Station. NASA prudently decided Monday to roll its massive Space Launch System rocket and Orion spacecraft into the Vehicle Assembly Building for protective cover. While this is likely to cause a delay of about six weeks on the Artemis I mission, it is better than damaging the vehicles.

United Launch Alliance has a mission planned for Friday, September 30, to launch two television broadcast satellites for SES from Cape Canaveral. Expect it to be delayed. NASA also hopes to launch its next manned mission to the International Space Station on October 3. Depending on the effects of Ian, including damage to the spaceport and disruption to the lives of those who work there, this Crew-5 launch on SpaceX’s Falcon 9 rocket could also be delayed.

On Monday, SpaceX vice president of build and flight reliability Bill Gerstenmaier said the Crew Dragon spacecraft is mated to the Falcon 9 rocket. For now, though, the vehicles remain safe inside the company’s hangar in Florida. “We are ready to start when the weather allows it,” Gerstenmaier said during a news conference.

Canvases by Crossman, Schertzer in Lima

A quiet party for Dr. Oz as the “marathon countdown” begins in Pennsylvania

At the Mehmet Oz campaign's Election Night party on Tuesday night, there were no decisive results.
Read more