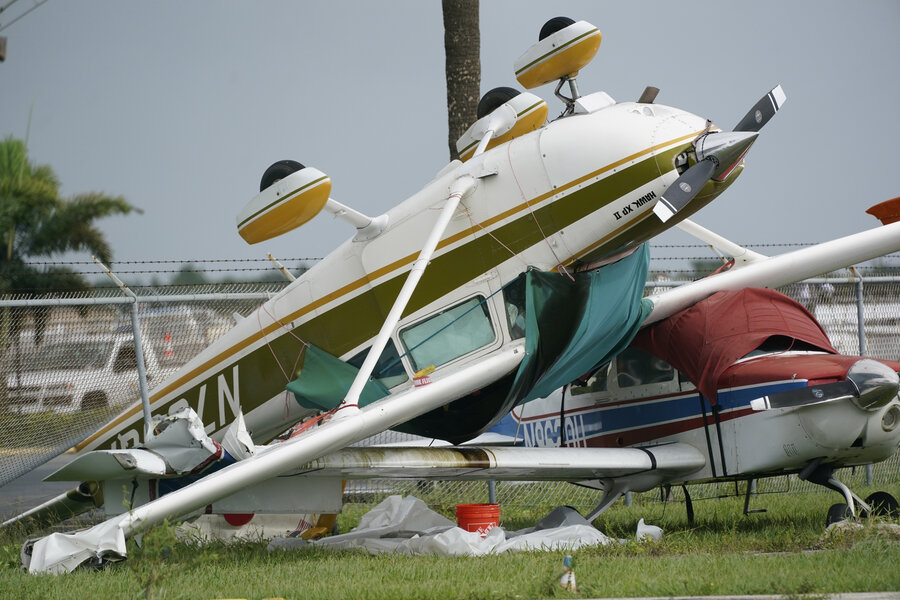 Hurricane Ian blazed a path of destruction across Florida, trapping people in flooded homes, severing the only bridge to a barrier island, damaging a hospital from above and below and knocking out power to 2.5 million people while dumping rain over a huge area. Thursday.

One of the strongest hurricanes to ever hit the United States threatened catastrophic flooding across the state. Tropical storm-force winds from Ian extended up to 415 miles, drenching much of Florida and the southeastern Atlantic coast.

Authorities have yet to release a confirmed death toll.

“The Coast Guard had people that were in their attics and they were saved from their roofs,” DeSantis said. “We have never seen a storm surge of this magnitude. … The amount of water that has been rising, and will probably continue to rise today even when the storm passes, is basically a 500-year flood event.”

“It crushed us,” Marceno said. “We still can’t access a lot of the people who need it.”

Fort Myers Mayor Kevin Anderson told NBC’s “Today” that he had not been told of any deaths in the city, but Ian is by far the worst storm he has witnessed since the 1970s.

“Watching the water from my condo in the heart of downtown, seeing the water rise and flood all the stores on the first floor, it was heartbreaking,” said Mr. Anderson.

A section of the Sanibel Causeway fell into the sea, cutting off access to the barrier island where 6,300 people normally live. It was impossible to know how many heeded the mandatory evacuation orders before the tidal wave swept across the island.

Emergency crews sawed topped trees to reach people in flooded homes, but with no power and virtually no cell service, it was impossible for many people to call for help from the hardest-hit coastal areas where the surge hit.

“Portable towers are on the way for cell service. Your loved ones most likely will not be able to reach you,” the sheriff’s office in Collier County, which includes Naples, said. “We can tell you that as daylight reveals the consequences, it’s going to be a tough day.”

In Fort Myers, Valerie Bartley’s family spent desperate hours fearing the storm would destroy their home. She and her husband pushed the dining room table against a sliding patio door to protect it from strong winds, and he held it in place for her for two hours.

“I was terrified,” Mrs. Bartley said. “What we heard was shingles and debris from everything in the neighborhood hitting our house. … It was going on for hours. We just assumed he was trashing our house.”

As the storm raged outside, she said, her 4-year-old daughter took her hand and said, “I’m scared too, but it’s going to be okay.”

Hurricane Ian turned streets into rivers and toppled trees as it slammed into Southwest Florida on Wednesday with 150 mph winds. Ian’s strength at landfall was a Category 4, tying it for the fifth-strongest hurricane, measured by wind speed, to hit the US.

The center of Ian made landfall more than 100 miles south of Tampa and St. Petersburg, sparing the densely populated Tampa Bay area from the first direct hit by a major hurricane since 1921.

The National Hurricane Center said Ian strengthened into a tropical storm over land Thursday morning and was expected to regain near-hurricane strength after emerging over Atlantic waters near the Kennedy Space Center later that day. with South Carolina eyeing a second landfall in the United States.

A stretch of the Gulf Coast remained under ocean water: “Severe and life-threatening storm surge flooding 8 to 10 feet above ground level along with destructive waves have been occurring along Florida’s southwest coast since Englewood to Bonita Beach, including Charlotte Harbor.” the center said Thursday.

The Florida Highway Patrol closed the Florida Turnpike in the Orlando area due to major flooding and said the major artery in the middle of the state will remain closed until the water subsides.

Calls from people trapped in flooded homes or from concerned family members flooded 911 lines. Pleas were also posted on social media sites, some with videos showing debris-covered water sloshing toward the eaves of their homes.

Brittany Hailer, a Pittsburgh journalist, contacted rescuers about her mother in North Fort Myers, whose home was inundated by 5 feet of water.

“We don’t know when the water is going to go down. We don’t know how they are going to leave, their cars are wrecked,” said Ms. Hailer. “His only way out is on a boat.”

Hurricane warnings have been lowered to tropical storm warnings for the Florida panhandle, and widespread catastrophic flooding is likely to remain, the hurricane center said. Storm surges of up to 6 feet are still forecast for both coasts.

“It doesn’t matter what the intensity of the storm is. We still expect quite a bit of rain,” Robbie Berg, senior hurricane specialist at the National Hurricane Center, said in an interview with The Associated Press.

Up to a foot of rain is forecast for parts of northeast Florida, coastal Georgia and the South Carolina Lowcountry. Up to 6 inches could fall in southern Virginia as the storm moves inland over the Carolinas, and the center said mudslides were possible in the southern Appalachian mountains.

The US Coast Guard launched a 23-person search and rescue mission and managed to find three survivors about 2 miles south of the Florida Keys, authorities said. Four other Cubans swam to Stock Island, just east of Key West, the US Border Patrol said. Aircrews continued to search for possibly the remaining 20 migrants.

Life-threatening storm surge and hurricane conditions were possible Thursday and Friday along the coasts of northeast Florida, Georgia and South Carolina, where Ian was expected to move inland, dumping more rain from the coast, he said. the hurricane center.

In an infinite universe of infinite possibilities, where would you like to...
Read more