How Paul LePage, who ran to lead Maine, benefited from Florida tax breaks 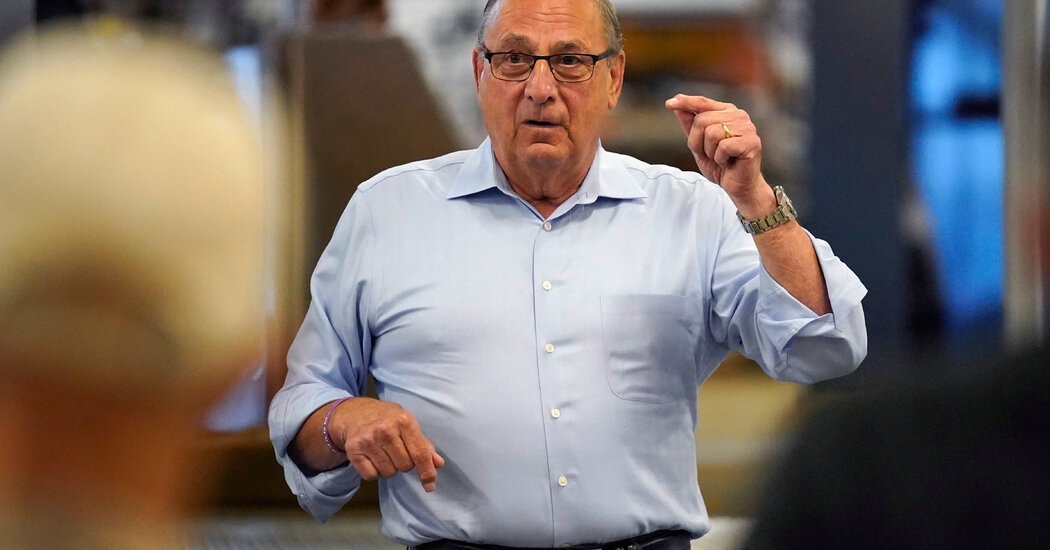 As Governor of Maine for two terms through 2019, Republican Paul LePage earned a reputation as one of the least filtered politicians of the pre-Trump era.

He said he wanted to tell President Barack Obama that “go to hell,” and told the NAACP that “kiss my ass”. He made racist comments about drug dealers who allegedly travel to Maine and “impregnate a young white girl before leaving.”

Making a comeback attempt now against his successor, the Governor. Janet Mills, a Democrat, Mr. LePage is focusing heavily on his campaign in a push to phase out Maine’s income tax. He argues the change is necessary to prevent wealthy residents from moving to Florida long enough each year to take advantage of Sunshine State tax breaks.

But Mr. LePage and his wife, Ann LePage, who have owned property in Florida for more than a decade, have benefited from that state’s tax laws while living in the Maine governor’s mansion and again while campaigning. to go back to work. From 2009 through 2015, and also from 2018 through the end of this year, the couple received property tax exemptions reserved for permanent Florida residents, public records show.

The properties in question, both in Ormond Beach, Florida, are a house the LePages bought in 2008 and sold in 2017, and another they bought in 2018 and still own. For both houses, the couple sought and received what is called a homestead exemption, which applies only to primary residences in Florida.

The sum the couple saved over the years is relatively small: just over $8,500, according to a New York Times analysis of public records.

But this isn’t the first time the LePages have faced scrutiny over such a tax matter: In 2010, Florida officials found Ms. LePage $1,400 before rescinding the sanction, and LePage’s focus on taxes in the current gubernatorial campaign could expose him to attack from Democrats.

Mr LePage’s campaign defended the tax moves, saying Ms LePage’s mother had used the Florida home as her primary residence from 2009 until her death in 2015, when the couple removed the first homestead exemption. Mrs. LePage’s mother had sclerodermaa chronic disease that causes hardening of the skin.

“Ms. LePage’s mother used to visit Augusta, but because of her condition, she spent a lot of time, especially in the cooler periods of fall, winter and spring, at that permanent residence” in Florida, said Brent Littlefield, a spokesman for the campaign. LePage. “Mrs. LePage also traveled there in the winter months to care for her. Her mother kept it as her primary residence while she was alive.”

The campaign did not comment on the second exemption held from 2018 to this year. Attempts to contact Ms. LePage directly were unsuccessful.

The State of the 2022 Midterms

With the primaries over, both parties are shifting their focus to the November 8 general election.

At campaign events, Mr. LePage spoke about the couple’s Florida home and criticized a Maine law that requires residents who split their time between the two states (so-called snowbirds) to spend at least 183 days , or just over half a year, in Florida to pay the lightest tax burden in the state.

“We’re going to Naples, Florida, to raise money from the Mainers because that’s where all the money is, and it’s unfortunate that they have to go away for six months and a day,” LePage said in Bangor last month. “I have no problem going to Florida. We are going to Florida, we have a house in Florida, but it is for January and February, not for six months and one day. It’s unfortunate that we have this crazy tax and this is what happens.”

But even though Mr. LePage said he and his wife were in Florida for only a couple of months a year, they have painted a different picture for Florida tax collectors over the years.

In his final months as governor, Mr. LePage told reporters in November 2018 that he had a home in Florida and planned to move there because the state had no income taxes, but at the time, records show he and his wife had already claimed a homestead exemption on their Ormond Beach property. , indicating that Florida had been the primary residence of the governor and first lady of Maine since March 2018, when they purchased the house.

That claim meant the four-bedroom house, about 15 minutes from the Atlantic Ocean, was eligible for a Florida homestead exemption, which takes $50,000 off the taxable value of qualified primary residences in the state.

After leaving office in 2019 due to Maine’s ban on serving a third consecutive term, Mr. LePage obtained a Florida driver’s license and registered to vote in the state. Then in February 2020, he said that he was considering a bid for a third term, and when he announced his candidacy last year quoted reviews of Ms. Mills’ response to the pandemic. She changed her voter registration to Maine in 2020 and advertised Photos of himself by putting the Maine plates back on his car.

The couple have rented a house in Edgecomb, Maine, since 2020, and Mr. LePage has been campaigning in the state for much of the past year. But it wasn’t until this June that Ann LePage told a Florida property appraiser that she and her husband were no longer Florida residents, according to the county assessor’s office. The tax break will remain in effect through the end of this year, according to an official with the assessor’s office in Flagler County, Florida, which handled the matter.

Jon Alper, a Florida attorney who specializes in asset protection, said the circumstances of the LePages’ homestead exemption claims were “admittedly atypical.”

“It’s possible under the law, but usually if one of the spouses is in the house, both are in the house,” he said.

The LePages have struggled with tax problems while toggling between the two states for more than a decade.

In 2008, while LePage was mayor of Waterville, Maine, his wife bought a house in Ormond Beach, not far from the house they would buy a decade later in the same city. He claimed the Florida homestead exemption even though he also claimed a homestead exemption on a home he owned in Waterville. Both states require homeowners to certify that a property is their primary residence in order to qualify for the exemption.

That misstep was reported in 2010, during LePage’s first campaign for governor. Florida tax officials originally found Ms. LePage $1,400 for misleading them about her residency status in the state, but he retired sentence shortly after, citing an explanation from Ms. LePage that her mother, Rita DeRosby, lived in the house. A rarely used provision in the Florida tax code allows homeowners to claim a homestead exemption if a dependent resides on the property.

Months after Ms. LePage was acquitted of wrongdoing, Ms. DeRosby joined the family’s move to the Maine governor’s mansion, according to local reportS. When Ms. DeRosby died in 2015, from obituary he said he had “spent the last eight years of his life residing” with his daughter and Mr. LePage.

Mr. LePage’s campaign proposal to eliminate Maine’s state income tax has drawn criticism from some Democratic officials that local governments would be forced to raise property taxes to offset the costs.

While governor, LePage sought to eliminate Maine’s homestead exemption, a proposal that would have denied some 213,000 Mainians benefits similar to those they enjoyed in Florida, according to a report. analysis by the leftist Maine Economic Policy Center.

Governors will break record in 2023