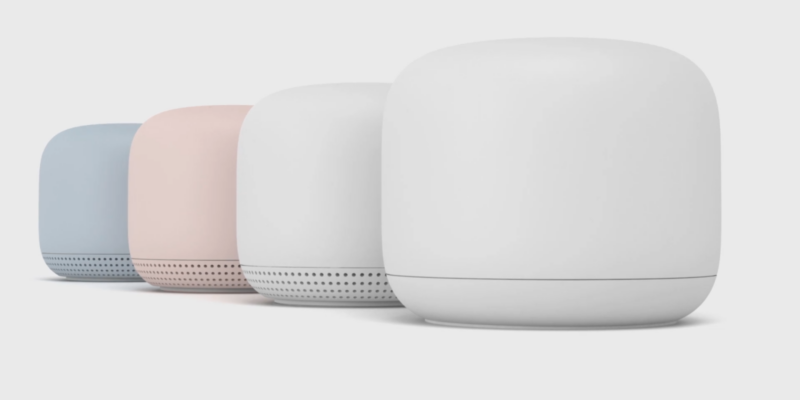 Google’s October 6 event is fast approaching and a hardware pitch is leaking ahead of time. We already know the Pixel 7, the Pixel Watch and the new low-end Chromecast. Now, how about the “Nest Wifi Pro”?

Fresh from its appearance at the FCC last month, Google’s upcoming Wi-Fi router appeared in a B&H Photo retail listing over the weekend. The list has been removed, but 9to5Google, which detected the list, has a backup. Right in the B&H headline is “Wi-Fi 6E” support, which is the big upgrade on this “Pro” model and should lead to a more robust connection. 6E moves Wi-Fi into the 6GHz range (alongside the existing 2.4GHz and 5GHz bands), which will greatly expand the capacity of the shared airwaves that all Wi-Fi has to use. If you live in a busy area like an apartment building, your Wi-Fi performance can be greatly reduced if your neighbors use the full spectrum. Picking up that new chunk of 6 GHz spectrum means more room for everyone.

The inclusion of the latest Wi-Fi standard will apparently come with a price increase for the new unit. B&H lists a price of $199 for a single unit, while the current Nest Wifi is $169 for a “router” unit. A pack of two Wifi Pros is $299 (non-Pro two-pack is $269), while a pack of three is $399 (vs. $349 for a non-Pro pack). The “Pro” branding and higher price tag make it sound like the existing Nest Wifi, which only supports the old 802.11ac protocol (also known as Wi-Fi 5), will still be for sale.

The current Nest Wifi two-pack and three-pack bundles include a “router” as the first unit and “point” units as the second and third devices, but that difference isn’t mentioned in Pro’s B&H listing. For the current Nest Wifi, the “router” is the main unit with two Ethernet connectors and better antennas, while the “point” units are just Wi-Fi extenders with no Ethernet ports. The main criticism of this package is that the two “point” units in a three pack cannot do wired backhaul because they do not have Ethernet ports. Having an Ethernet port on each unit would help the new model live up to the “Pro” name.

Google Assistant is also not mentioned in the list. In the current Nest Wifi, the “point” units also include a Google Assistant speaker and microphone, allowing you to participate in the Google ecosystem with one combined device. It looks like the Pro models will only be network devices.

Intel’s Mobileye exceeded its IPO goals, raising $861 million at a valuation of $16.7 billion

Mobileye is now set to begin trading on Nasdaq on Wednesday morning under the MBLY ticker symbol, the same one it had when Intel...
Read more