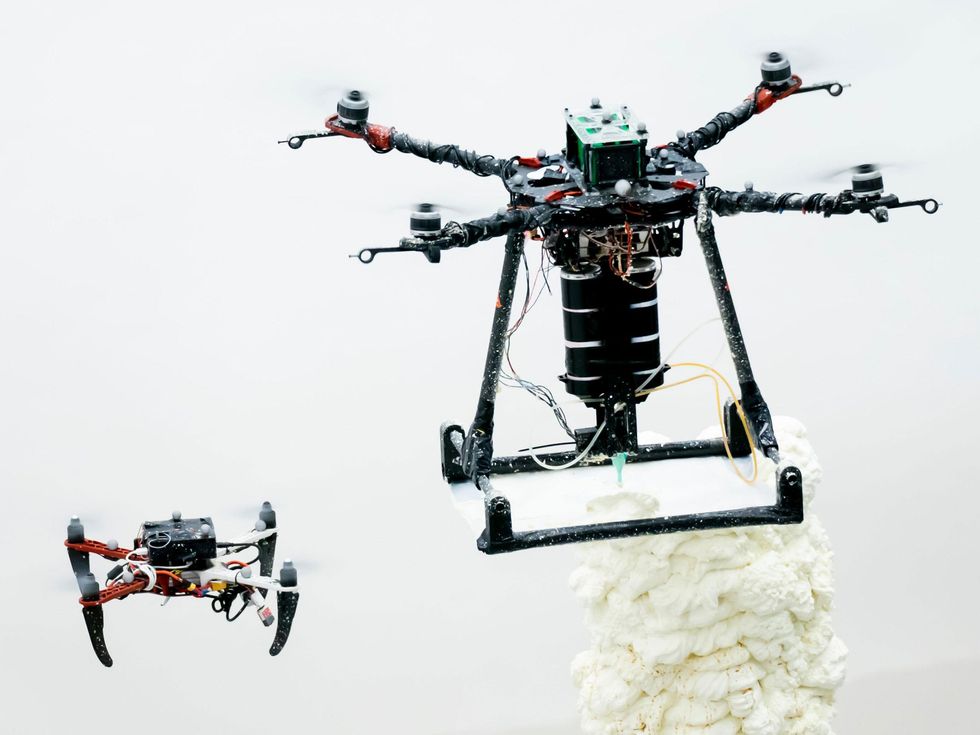 3D-printed flying robots modeled after wasps and birds could one day repair and build structures in remote sites beyond the reach of standard construction equipment, a new study finds.

Construction robots that can 3D print structures on sites may one day prove faster, safer and more productive than human teams. However, construction robotics currently focuses primarily on ground-based robots. This approach is limited by the heights it can reach and large-scale systems that require connection to a power source, which limits where they can be deployed.

In the new study, the researchers drew inspiration from flying animals that are highly skilled at construction. For example, a Barn Swallow can overcome the limited payload it can carry in one flight by typically making about 1,200 trips between where it obtains its building material and the construction site to build its nest incrementally.

“When animals want to build something big, they work together in swarms or collectives to do it.”
—Mirko Kovac, Imperial College London

The new fleet of robots the researchers developed, which they call their aerial additive manufacturing system, can collectively and autonomously print three-dimensional structures while in flight. The fleet consists of two types of untethered, four-rotor drones: BuildingDrones that deposited material in layers from nozzles, and ScanDrones that used standard optical cameras to continuously map structures in 3-D and monitor their quality.

“This combination of fabrication and scanning with flying robots is very new,” says study lead author Mirko Kovač, a robotics specialist at Imperial College London and the Swiss Federal Laboratories for Materials Science and Technology in Dübendorf, Switzerland.

The drones work cooperatively from a single plane, adapting to variations in the geometry of the structure in real time as construction progresses. The robots are completely autonomous while flying, but a human supervisor can monitor data from the drones and intervene when necessary.

A question often asked about this approach is “can you build something with a drone when a drone can carry relatively little?” Kovac says. The key to this strategy is not just using one drone, “but many drones working together, which is what you see in the animal kingdom as well. When animals want to build something big, they work together in swarms or collectives to do it.”

The researchers developed four different mixtures with which the robots 3D printed. Robots, their software, the materials they build with, and the architecture they end up building need to be designed together, Kovač says, an approach the researchers call “physical artificial intelligence.”

“We don’t just take a material and put it on a robot: the evolution of the material itself can be quite complex and is tailored to be integrable with a robot that has a relatively low payload,” says Kovač.

In the experiments, the drones could make a 72-layer cylinder about 2 meters high, 30 centimeters wide and 72 layers of insulating polyurethane foam in 29 minutes. They could also build a 7-inch-high, 13-inch-wide, 28-layer cylinder from a cement-like material in 133 minutes. In total, they achieved a manufacturing accuracy of 5 millimeters, acceptable within UK construction requirements.

The scientists note that their approach is potentially scalable to large numbers of robots working in teams. Potential applications may include “work at height or in areas that are inaccessible, for example building facades or remote structures that need very quick repair, such as pipes,” says Kovač. Other potential uses may include construction in harsh locations or after natural disasters, the researchers say.

“We are now working on case studies with industrial partners to apply our approach to industrial problems,” says Kovač. “We can tailor our drones to one use case or another – this can include larger drones or slightly different drone designs.”

Kovač, along with architect Robert Stuart-Smith of University College London and the University of Pennsylvania in Philadelphia and their colleagues, detailed his findings online September 21 in the newspaper Nature.

Of the articles on your site

Related Articles on the Web

Elon Musk sells another $3.9 billion worth of Tesla stock

Twitter has been struggling. Some major advertisers have stopped spending on Twitter due to the change of control. A top advertising executive, Sarah...
Read more

Boston police officer arrested in Haverhill for operating under the influence

A Boston police officer was arrested in Haverhill on Monday and charged with operating under the influence of drugs, according to authorities.Christopher Long is...
Read more

EPA: Water in Mississippi’s capital city is safe to drink

JACKSON, miss... The US Environmental Protection Agency confirmed Monday that the water in Mississippi's capital city is safe to drink, after months of sampling...
Read more