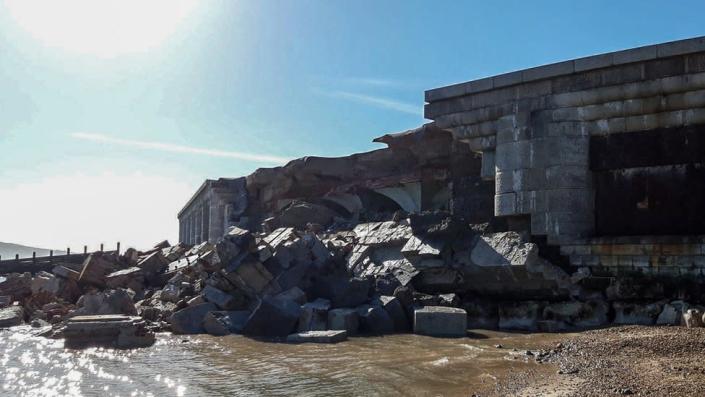 Castles that have been standing for hundreds of years are at risk of being damaged by climate change, warns the conservation charity English Heritage.

They include Tintagel in Cornwall and Hurst Castle in Hampshire.

It is appealing money to repair walls and improve defenses against more powerful storms and waves.

“It seems that the whole natural dynamic of the coast in some places has been accelerated by climate change,” Rob Woodside, director of estates at English Heritage, told BBC News.

“What we’re trying to do now is essentially buy time, so with places that we value and that people want to take care of, we put measures in place to protect them.”

There is a broad consensus among scientists that even if emissions of greenhouse gases that warm the earth are drastically reduced, global sea levels will continue to rise for several hundred years. Higher sea levels mean more powerful waves moving closer to shore and faster coastal erosion.

Here are the six sites that English Heritage says are most at risk:

Originally built by the Tudor King Henry VIII between 1541 and 1544, a section of the east wing of Hurst Castle collapsed into the sea in February 2021 after its foundations eroded. As part of the efforts to defend the castle, 5,000 tons of granite boulders were laid down to form a barrier or “revetment”.

Erosion is not a new problem in Tintagel. It has been under attack by wind and sea since it was built in the 13th century. There are regular cliff falls and English Heritage says funds are urgently needed to repair damage from last winter’s storms.

The 14th-century Piel Castle stands on a low-lying island about half a mile offshore in Morecambe Bay. Much of the island has already been lost to erosion and part of the castle fell into the sea in the 19th century. English Heritage says the keep and bastions of the castle are now at risk from both erosion and flooding.

For 500 years this Tudor fort in Devon has guarded the narrow entrance to the Dart Estuary as the last line of defense to protect Dartmouth from attack from the sea.

The shape of the Garrison Walls creates pinch points or “armpits”, where the tide is concentrated. English Heritage says that these sections are extremely vulnerable to erosion and will break up for years to come if not protected.

Calshot Castle sits on a small, vulnerable spit of land on the River Solent. The site is at a low level, making it vulnerable to sea level rise and erosion.

Discovery of new microscopic species expands the tree of life

Kat Timpf: Fentanyl crackdown would give government an excuse to ‘violate civil liberties’

NEWYou can now listen to Fox News articles! Fox News personality Kat Timpf argues that the US government should not crack down on...
Read more

An EU court has largely upheld a £3.5bn fine against Google for its Android platform.
Read more