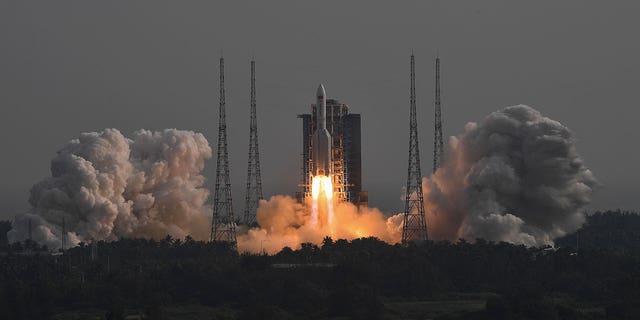 China launched its third and final module on Monday in its effort to complete its permanent space station as competition with the United States continues to intensify.

Mengtian was launched into space from the Wenchang Satellite Launch Center in Hainan. It is the second laboratory module on the station, along with Wentian.

Mengtian was launched aboard a Long March-5B Y4 carrier rocket and was expected to spend 13 hours in flight before reaching the station, known as Tiangong, or “Heavenly Palace.” Crew members will be able to conduct experiments in a zero-gravity atmosphere at Mengtian while also having access to an airlock and a small robotic arm to help with extravehicular payloads.

Tiangong is currently home to three crew members, two male and one female astronauts, according to the China Manned Space Agency. Crew members arrived at the station in June for a six-month undertaking to complete station assembly, participate in spacewalks and conduct other experiments.

Following Mengtian’s arrival, an unmanned Tianzhou cargo ship is expected to dock at the station next month, with a manned mission scheduled shortly thereafter in December. Crews may overlap as a result of scheduled launches.

Mengtian and Wentian collectively form Tiangong. Both are connected to the Tianhe core module where the crew currently lives and works.

Wentian is the heaviest single-module spacecraft currently in space, weighing in at 23 tons. China plans to launch the Xuntian space telescope next year, which will orbit in sequence with Tiangong and dock occasionally for maintenance.

In this photo released by Xinhua News Agency, the laboratory module of China’s Mengtian space station and the Long March-5B Y4 rocket are transported to the launch area at the Wenchang Satellite Launch Center in Hainan province. , in southern China, on October 22, 2019. 25, 2022.
(Tu Haichao/Xinhua via AP)

China’s growing space capabilities have become a hot topic as competition with the US continues to gain momentum.

China’s manned space program officially turns three decades old this year. But it really started in 2003, when China became the third country after the US and Russia to put a human into space using its own resources.

SPACE ARMAGEDDON: WHY THE PENTAGON FEARS STAR WARS WEAPONS FROM RUSSIA AND CHINA

The United States excluded China from the International Space Station due to its program’s military ties.

Haley Chi-Sing is a digital production assistant for Fox News. You can reach her at @haleychising on Twitter.

Will the GOP nominate the man Democrats know they can beat?
Read more

Florida officials and residents were keeping a cautious eye on Tropical Storm Ian as it moved across the Caribbean on...
Read more

NBA powerhouse Steph Curry shared in a Rolling Stone new profile that his friend Barack Obama sent him a "stern" email after he casually...
Read more