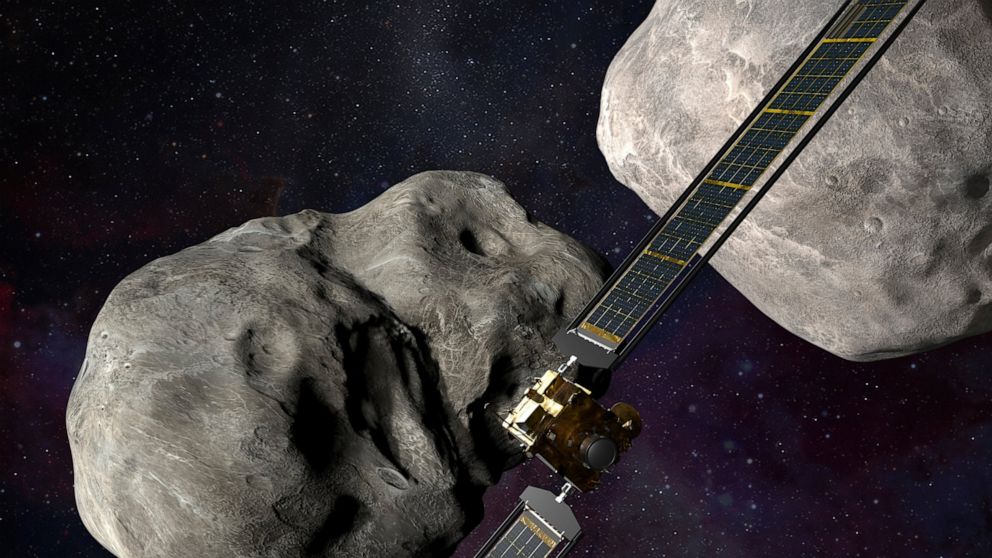 CAPE CANAVERAL, Florida. — A NASA spacecraft rammed into an asteroid at breakneck speed Monday in an unprecedented dress rehearsal for the day a killer rock threatens Earth.

The galactic hit occurred on a harmless asteroid 7 million miles (9.6 million kilometers) away, with the spacecraft called Dart slamming into the space rock at 14,000 mph (22,500 kph). Scientists hoped the impact would create a crater, launch streams of rock and dirt into space and, most importantly, alter the asteroid’s orbit.

“We have impact!” Elena Adams from Mission Control announced, jumping up and down and thrusting her arms skyward.

Telescopes around the world and in space pointed to the same point in the sky to capture the spectacle. Although the impact was immediately obvious (Dart’s radio signal abruptly ceased), it will take days or even weeks to determine how much the asteroid’s trajectory changed.

“Now is where the science begins,” said Lori Glaze, director of NASA’s planetary science division. “Now we’re really going to see how effective we were.”

The $325 million mission it was the first attempt to change the position of an asteroid or any other natural object in space.

“What an amazing thing. We’ve never had that capability before,” Glaze said.

Earlier in the day, NASA Administrator Bill Nelson reminded people via Twitter that “no, this is not a movie plot.” He added in a prerecorded video: “We’ve all seen it in movies like ‘Armageddon,’ but the stakes are high in real life.”

The pair have been orbiting the sun for eons without threatening Earth, making them ideal candidates for the test of saving the world.

Dart’s onboard camera, a key part of this intelligent navigation system, spotted Dimorphos just an hour before impact.

With an image returning to Earth every second, Adams and other ground controllers in Laurel, Maryland, watched with growing excitement as Dimorphos loomed larger in the field of view alongside its larger companion. Within minutes, Dimorphos was alone in the images; it looked like a giant gray lemon, but with rocks and debris on the surface. The last image froze on the screen as the radio broadcast ended.

The flight controllers cheered, hugged and high-fived each other. Their mission complete, the Dart team went straight into celebration mode. There was no sorrow for the disappearance of the spaceship. “He’s meeting his destiny,” said Betsy Congdon, lead mechanic at Johns Hopkins.

A mini satellite followed it a few minutes back to take photos of the impact. The Italian Cubesat was launched by Dart two weeks ago.

The scientists insisted that Dart would not destroy Dimorphos. The spacecraft packed a mere 1,260 pounds (570 kilograms), compared to 11 billion pounds (5 billion kilograms) for the asteroid. But that should be enough to shorten its 11-hour, 55-minute orbit around Didymos.

The impact should be 10 minutes, but the telescopes will need anywhere from a few days to almost a month to verify the new orbit. The anticipated 1% orbital shift may not sound like much, the scientists noted. But they stressed that it would amount to significant change over the years.

Planetary defense experts prefer to fend off a threatening asteroid or comet, well in advance, rather than blow it up and create multiple pieces that could rain down on Earth. Multiple impactors may be needed for large space rocks or a combination of impactors and so-called gravity tractors, yet-to-be-invented devices that would use their own gravity to pull an asteroid into a safer orbit.

“The dinosaurs didn’t have a space program to help them know what was coming, but we do,” said Katherine Calvin, NASA’s senior climate adviser, referring to the mass extinction 66 million years ago that is believed to have been caused by the impact of a large asteroid. , volcanic eruptions, or both.

The nonprofit B612 Foundation, dedicated to protecting Earth from asteroid impacts, has been promoting impact tests like Dart since its founding by astronauts and physicists 20 years ago. Monday’s feat aside, the world needs to do a better job of identifying the myriad lurking space rocks, warned the foundation’s executive director, Ed Lu, a former astronaut.

Significantly less than half of the estimated 25,000 near-Earth objects in the deadly 460-foot (140-meter) range have been discovered, according to NASA. And less than 1% of the millions of smaller asteroids capable of causing widespread injury are known.

Nearly completed in Chile by the National Science Foundation and the US Department of Energy, the Vera Rubin Observatory promises to revolutionize the field of asteroid discovery, Lu said.

Finding and tracking asteroids, “That’s still the name of the game here. That is what has to happen to protect the Earth,” she said.

The Associated Press Health and Science Department receives support from the Howard Hughes Medical Institute’s Department of Science Education. The AP is solely responsible for all content.

A Texas judge on Friday expanded her order that prevents the state from investigating families of transgender youth who have received gender-affirming health care.Judge...
Read more

October 19—A man remains in federal custody after being accused of attempting to smuggle more than 32 pounds of cocaine through the Javier Vega...
Read more